The fall armyworm, Spodoptera frugiperda, is one of the most devastating agricultural insect pests in the world.

The fall armyworm, Spodoptera frugiperda (Lepidoptera: Noctuidae),  feeds on a broad range of important food and feed crops including maize (corn), sorghum, rice, millet, sugarcane, cotton, potatoes, etc. It affects the economy and agricultural trade of entire regions and is a threat to food security for millions.

This pest is native to the tropical and subtropical regions of the Western hemisphere, where its defoliating damage to maize can lead to more than 70% yield reduction. Under heavy infestations, larvae may disperse to new emerging adjacent fields with reports of 100% plant cutting damage to newly planted maize. Biosecurity Queensland says fall armyworm was detected on a property in the Gulf country of north-western Queensland, and in South Johnstone, Tolga, Lakeland and the Burdekin region in North Queensland. The most recent detection is in Bowen. It is anticipated that it will migrate south towards New South Wales.

1.   Impact to the industry

The larval stage of the fall armyworm (FAW) is a pest that can damage and destroy a wide variety of crops causing large economic loss. Outbreaks usually occur during the early part of the summer.

Destruction of crops can happen almost overnight, because the first stages of a larva’s life require very little food, and the later stages require about 50 times more. Because of this rapid change in food consumption, the presence of larva will not be noticed until they have destroyed almost everything in as little as a night.

•      Examples of targeted crops include cotton, tobacco, sweet corn, rice, peanuts, fruits and many more. The list of possible food sources for the larvae is extensive. Because the larva eat so much of the plant, they are extremely detrimental to crop survival and yield.

•      It is most commonly recorded from wild and cultivated grasses; from maize, rice, sorghum and sugarcane.

•      While both strains have been detected in Africa and Asia, work is currently underway to determine which strain is attacking in Australia.

2.   Why is fall armyworm so devastating?

Key pest status – Maize yield losses of 70% were reported in Central America when the pest was not controlled. Crop destruction (100%) in Brazil was reported when late stage larvae acted as a seedling cutworm. Damage across the globe estimated in billions of dollars.

Highly migratory pest – Adults able to travel 100 km per night and 500 km prior to oviposition when assisted by strong winds. Larvae occasionally relocate to nearby suitable crops. Persist year-round in tropical environments – Eight to ten generations per year in some regions and lack of diapause allow this pest to infest crops at any time of year.

Cryptic feeding and behaviour – Adults hide during the daytime; ground migrating larvae may hide under crop cover; larvae feed deep in the whorl. These behaviours allow this pest to go undetected, avoid predation and make it difficult to reach with foliar sprays. 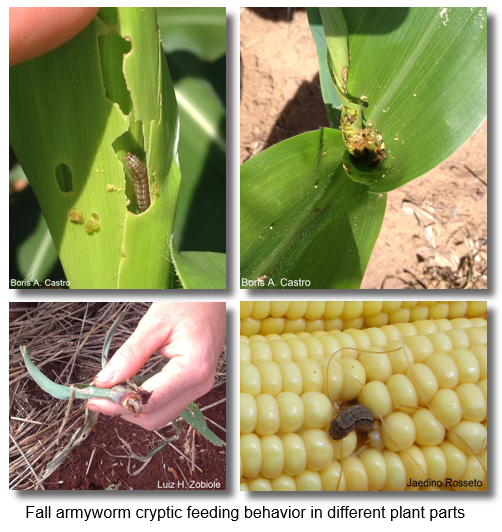 Difficult to control – Natural levels of tolerance to some insecticidal proteins and demonstrated ability to develop resistance to insecticides and transgenic traits.

Adults are capable of flying long distances. Their migration rate is remarkably fast, estimated at almost 500 kilometres per generation. They can also spread through people movement, with it believed that their arrival in Africa was via a passenger flight.

•      Fall armyworm is adapted to the warmer parts of the World; the optimum temperature for larval development is reported to be 28°C.

•      In the tropics, breeding can be continuous with four to six generations per year, but in cooler regions only one or two generations develop; at lower temperatures, activity and development cease, and when freezing occurs all stages are usually killed.

•      Fall armyworm can survive north of Latitude 35 south - anywhere north of a line from Woolongong to Adelaide that also meets the below guidelines.

It is anticipated that the geographical spread will be tropics and subtropical areas while migration further south MAY occur, especially over the summer months. 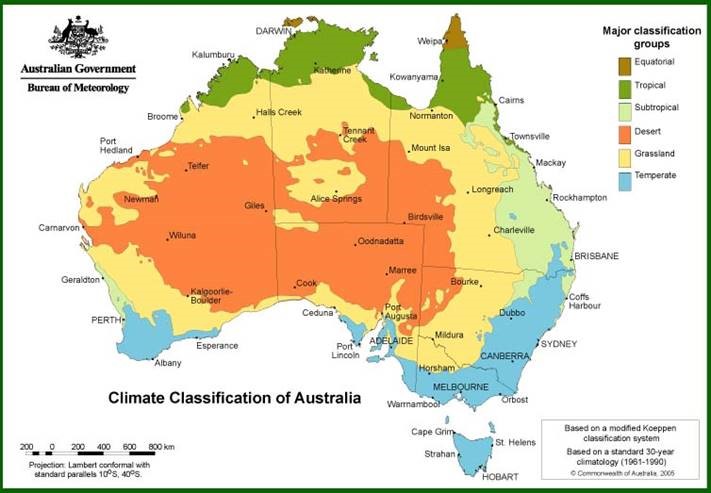 Identification of adult through to eggs

The larva is the damaging stage of the fall armyworm. The larval cycle last 14 days in warmer temperatures and about 30 days in milder or cooler conditions. The larva undergoes six growth stages called “instars” which are identified as L1, L2 , and up to L6.

Learning to locate and identify egg masses and their colour is a valued skill in the scouting process to predict larval eclosion and take appropriate actions.

•Eggs laid in clusters of 50 to 200 called “egg masses” attached to plant foliage.

•Egg masses are covered with a protective layer of whitish hairs from the female’s abdomen. A female can deposit 1500 to 2000 eggs in her lifetime.

Learning to locate and identify egg masses and their colour is a valued skill in the scouting process to predict larval eclosion and take appropriate actions.

•Pronounced hairs and bumps along the body, body colours of pale green and yellowish are common in L1-L2, which help them camouflage in green vegetation.

•As larva grows, it takes on grayish brown to dark brown colouration. Head colour varies from orange to dark brown.

•Colour variation and the small size of young larvae make it difficult to differentiate from other larva species. Seeing these distinctive markings often requires a hand lens.

•Newly eclosed larvae wander around briefly and quickly move to the whorl leaves where their exposure to chemical sprays is reduced.

•Colour patterns and spots in mid to large-sized larvae easier to observe for proper identification.

•Fully-grown caterpillars normally drop or crawl down the plant to the ground to pupate. Occasionally, they may pupate in plant parts, especially after ear tissue feeding.

•Larvae burrow 2 to 8 cmsinto the soil and spins a loose cocoon made of silk impregnated with fine soil particles and soil debris.

•Highly active at night, hide during the day. In maize, adults can be found hiding in between leaves or inside whorls.

•Strong nocturnal flyers, capable of long distance migration up to 100 km on a single night and an estimated of 500 km in the few days prior to oviposition assisted by strong wind currents. 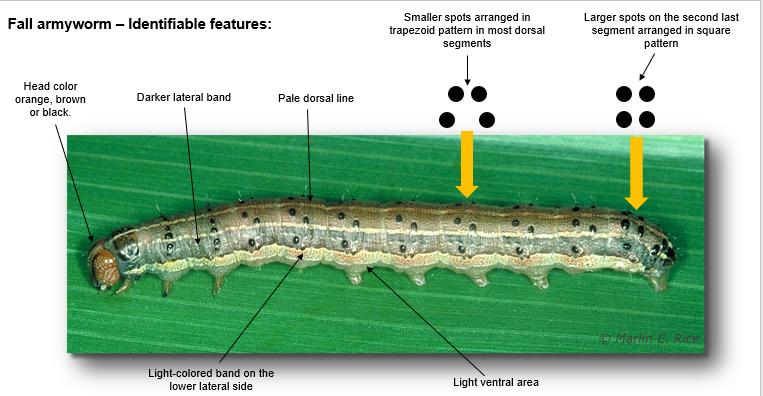 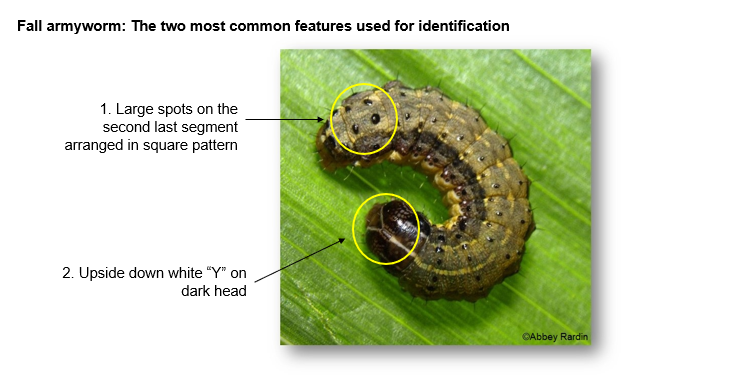 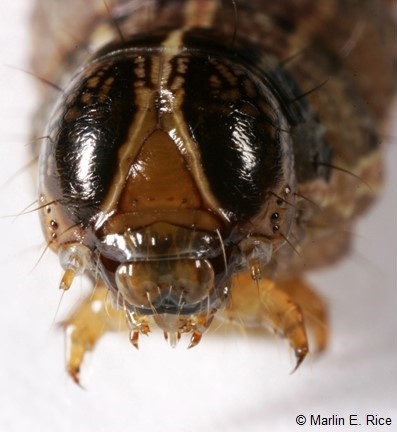 Tactics to prevent or avoid the arrival of the pest to a particular area include regulatory strategies and cultural methods.

Note: The practice of crop rotation is of limited use for fall armyworm management due to the pest’s high mobility, migratory status and polyphagous behaviour. 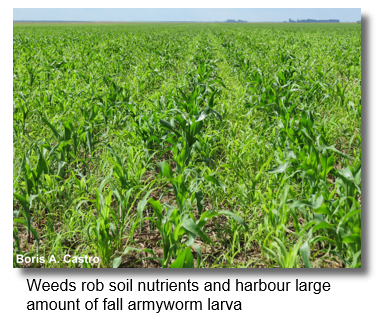 •Pheromone traps alert growers of the arrival of fall armyworms adults to an area.

•An increase in adult fall armyworm trapping does not trigger an insecticide application and should not be used as an action threshold. However, this information helps farmers understand when to increase field scouting.

•There are numerous lures and trap designs for fall armyworm. Instructions for use vary by manufacturer. It is important to standardize trapping methods when the intention is to use for community-wide forecasting.

•Adult data collected over several season provide an indication of when peak adult trapping are normally expected to occur in an area.

•When handling lures, wear disposable rubber gloves or wash your hands immediately. Not doing so may cause contamination of bait stations.

•Do not leave used lures or lure wrappings near traps. The small amount of lure left in them may compete with baited traps.

•Never place more than one lure at a time in a trap. 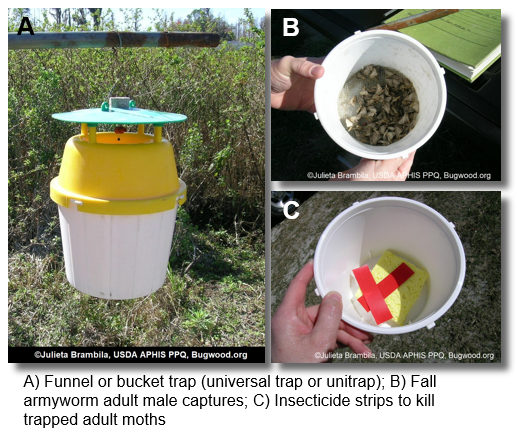 It is designed to detect fall armyworm presence in a field and assess feeding injury:

•Field scouting is one of the most important activities a farmer can do to manage infestations based on informed decisions.

•It consists of entering the maize field and looking for presence of fall armyworm eggs, larvae, etc. and feeding signs.

•Relies on the ability to identify correctly the fall armyworm, understand its biology and behaviour and recognize early feeding.

•Fields should be “scouted” at a minimum of once per week or more often when conditions favour infestations, e.g. crops in the vegetative stage, increase in male moth trapping, presence of egg masses, etc.

Chemical control depends on the rational and responsible use of selected approved chemical insecticides to manage the fall armyworm.

*Note: Known fall armyworm resistance has occurred for carbamates (MoA Group 1A); organophosphates (Group 1B); pyrethroids (Group 3A); Bacillus thuringiensis and Cry1F protein (Group 11A); diamides (Group 28). An IRMS plan requires the rotation of different MoA for season management of an insect pest.

Corteva Agriscience has assisted Horticulture Innovation to successfully secure an emergency use permit (Permit 89241) from the Australian Pesticides and Veterinary Medicines Authority (APVMA) to allow the use of Success Neo for the control of fall armyworm. See SOLUTIONS section for further information.

Success Neo and Delegate Insecticide can be applied under Permit 89241 for control of Fall Armyworm in various crops.

It is important to remember that it is not systemic, this means that it does not travel through the plants vascular system, thus new untreated growth remains unprotected. It also means that grubs entrenched deep within the plant foliage are protected from the spray deposit and may not be controlled.

It is for this reason it is recommended that application of Success Neo are made early in the crops growth stage – apply during the vegetative crop stages to ensure  thorough contact with the pest. Follow label directions ensuring that the correct label rate is applied with sufficient water to achieve excellent coverage and penetration into the crop canopy. 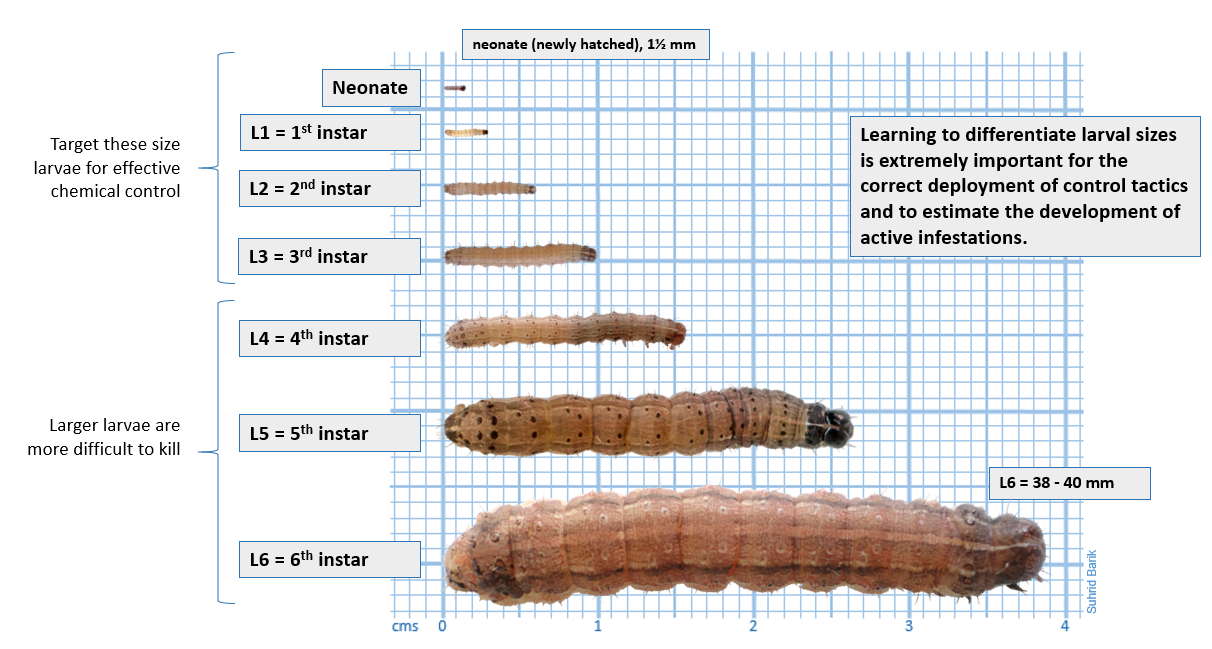